Getting Ready to Leave Germany for Australia
“Nobody Can Give You What I Can Promise To You!”

As I have talked with my brother about our departure from Germany after three months, on our way to Australia, I was reminded of the saying, “Nobody can give you what I can promise to you.” Promises are easy, giving is not.

before the Nazi invasion of Czechoslovakia in 1939. The day after the invasion he left his wife in Ostrava, and fled to Russia. When he crossed the border he was happy, and showed them his Communist ID papers. He told them he was ready to help win the war. The Communist officials thanked him very much, and put him on a train to go further east, to a concentration camp. The promise of freedom was far bigger than the giving of it!

Every morning he told the camp commandant there had been a serious error, that he was on their side, and should not be in the concentration camp. As a Czech, he was an ally. Perhaps he did not realize that as a Jew he was an enemy, As far as the Russians were concerned, freedom was not the same for everyone. The commandant told him to get back to work, and the authorities would “work” on the “error.”

Then, after the war, in Ostrava, he worked for my father in the textile factory that had belonged to the Germans. He finally ended up in Jerusalem, selling children’s clothing, using a better version of the rule had had learned in Russia, in the far East: “Nobody can give you what I can promise you,” meaning his goods were the best of all.

On our way to Australia we spent about 3 months in Germany in 1969, arriving first by airplane from Prague on Lufthansa Airlines. When Rose, Hana, and I arrived by plane from Prague to Frankfurt we asked people at the airport how to find the train station and get to Munich by train. The directed us to the rail yard, and we arrived in Munich the next morning. Peter met us at Munich when we arrived.

For the short time in Germany I had a small series of engineering jobs. I learned of them through various technical work solicitation ads and Industry newsletters. During that three months in Germany I had two or three jobs. One of them was working for a gentleman who had an engineering background, but also had been an SS officer. I needed the job, so I accepted, and I shook his hand. As I did, I remembered that my own father would not have shook a man’s hand who was previously an SS officer.This said that he had been stationed in Paris for the Nazi occupation there, and he had not been in the Czech lands, or at Terezin or Auschwitz. He said he had good relations with the French and that he still had contact with them after the war.

One of the projects I remember was building a large dome and it had a lot of mathematical calculations to support all the concrete. I used to slide, which was all we had before computers were invented! Fortunately, one of the projects that I worked on was exactly the same as the exercise we did at the University in Prague, learning how to do this type of engineering calculations.

Another thing I remember from the time in Germany was weekend trips over throughout Europe, with Peter sometimes, by car. Peter also was a very fast driver and often got speeding tickets. He later he assigned those speeding tickets to his brother (me!) who had left the country for Australia. When returning to German to visit, they had a record of these speeding tickets, but I did not get in trouble.

Before even getting to Germany we always knew that we wanted to go to America. We tried to go directly there, but found that there was a long waiting list and it was very expensive. Through another friend we found out that Australia would gladly welcome us. Then we learned that Australia said they would pay for everything, and help us pay for the tickets. With one little girl (Hana) and a pregnant wife (Rose) we made the very long and crowded flight, stopping in Singapore and Karachi on the way. All of the flights and travel arrangements were at no cost to us, because of Australia wanted us to immigrate there. This was because we had promised to a two year commitment to work for the Australians in order to have them pay for all of our travel there. Our biggest priority was that Rose did not want to have her second baby girl be born in Germany, so getting out quickly was important

Watch for the new, Tenth Edition of “Children on Death Row,”

now available on Amazon in paperback and Kindle formats!

Tom Lenda was born Tomas Lustig on May 25, 1936 in Pilsen, Czechoslovakia (now Czech Republic). Tom’s father, Pavel (Paul) Lustig, was born in Domazlice, Czechoslovakia in 1904. The Lustig family moved to Pilsen shortly after Paul was born. Tom’s mother, Irene Spitz, was born in Austria in 1909. Her family later moved to Decin, a city north of Prague. All of these places were part of the Austro-Hungarian Empire at that time. This changed in 1918 after the First World War when Czechoslovakia was established.

The Lustig family was warm, loving, and hard working. Tom’s father Paul was educated in commerce and also attended a textile college in England. His mother worked as a certified nurse in a hospital until her marriage. Paul was an established textile manufacturers’ representative at the time when Tom was born.

The Lustig family was part of a close-knit family clan that was well established within the Czech community; they considered themselves proud Czechoslovakian citizens of the Jewish religion. Involved in the local Pilsen Jewish community, Paul was known for his anti-Nazi feelings.

The Nazi invasion of Czechoslovakia became a reality for the Lustig family on March 15, 1939. Little Tommy was almost three years old at that time. Paul escaped the same day to the east, to the suburbs of Prague. Irene and Tom followed two weeks later. On September 12, 1942, three years later, they were sent to the Terezin Concentration Camp some 40 miles north of Prague. Paul’s brother Fred escaped to Slovakia where he joined the anti-Nazi underground and later the Czechoslovakian army. Paul’s youngest brother Otto escaped to Shanghai and settled in Canada after the war. Irene’s two brothers and mother had been sent to Terezin earlier, though only one of the brothers was still in the camp when the Lustigs arrived. Irene’s mother and other brother had been sent on to extermination camps in the East.

Lustig family was separated shortly after their arrival at Terezin. Tom was placed into a “Heim” (home) with otheThe r little boys and girls. Irene started work as a nurse in the camp hospital, also her living quarters. Paul was assigned to a Transportleitung (transportation) group and was sent to Auschwitz concentration camp in fall of 1944. Toward the end of the War, when the Red Army approached the camp, he escaped with a little group and joined the Czechoslovakian army. He did not know that his brother Fred had also joined. Paul met Fred later and learned that he routinely changed his name to avoid difficulties for other members of the family should he be caught by the Nazis.

Paul and Fred took part in the liberation fights. They both received medals for their courage and efforts. Paul came back to Terezin to retrieve his family on May 25th, 1945. Tom was just nine years old on that day. They traveled to Prague together. Irene returned to Terezin to continue her duties as a nurse in the hospital to help the victims of the typhoid epidemic. This was in accordance with her promise to God, should her husband return unharmed. Tom traveled with Paul to his army unit and started to attend a regular school. The family united again one month later.

Tom’s writing and presentation is primarily about his experience as a little boy living in Terezin. He has been telling his story to students and community members for about five years with the Holocaust Education Center’s Speakers Bureau. Tom has written a book, Children on Death Row, available on Amazon Kindle. 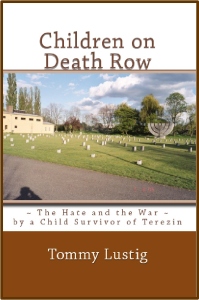 Inspired by Children on Death Row:

About the Title Photograph:

The Jewish Cemetery and the Crematorium at Terezin. Photo by Thomas O. Lenda (Tommy Lustig) May 2005.

Visitors to This Site